Come Home Year 2022 is the perfect time to bring back our Monday night guest artist series and to welcome home Gros Morne Theatre Festival alumni who have excelled in their art throughout the region and province, across the country and around the world. This will feature music, theatre and dance performances. 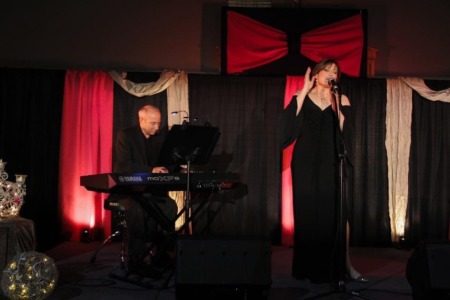 Newfoundland’s Broadway star, Petrina Bromley is home from the smash hit Broadway musical, Come From Away, and what better way to spend the time than to join forces with renowned St. John’s musician and pianist Bill Brennan for an evening of favourite songs. Petrina and Bill will perform a mixed tape of Broadway, Pop, Country, and traditional music to make your toes tap and bring a smile to your face.

Petrina Bromley is an actor, singer, director, writer and com

poser from St. John’s, NL. She originated the role of ‘Bonnie Harris’ in the Tony nominated musical COME FROM AWAY, and continues with the show on Broadway.

She also appears as the less frightening nun, Sister Margaret, in the new hit CBC/ Lionsgate tv series SON OF A CRITCH, starring Benjamin Evans Ainsworth (The Haunting Of Bly Manor, Disney’s Pinocchio) and Malcolm MacDowell (Mozart In The Jungle, A Clockwork Orange).

Bill’s expertise as a pianist, percussionist, composer and pr

oducer can be heard on some 100 albums to date.  He has been musical director/composer for CBC’s Vinyl Café, The Nature of Things and for numerous stage productions including Rock of Ages, Jesus Christ Superstar, Evita and The Little Mermaid. More than 30 years of relentless experience have garnered Bill a solid reputation as a player, composer and arranger of contemporary classical, jazz, folk and world music — always exploring, always open to new ideas. Geoff Chapman of the Toronto Star says: “Brennan … is a central figure in this country’s music.” (Photo by Aaron Winters)

Newfoundland has a storied history of stunning songwriters, poets and players. Over the course of the last decade The Once have writ and knit themselves into that story with continuous Canadian and international touring, Canadian Folk Music Awards, East Coast Music Awards, JUNO Award nominations, and a dedication to songwriting. On their latest album, “Time Enough”, the band stays true to the strength of their three-part folk harmony sound, while extending its borders into new territory that stays fresh but sounds unfamiliar. The Once have also appeared as guest vocalist on the past three Passenger albums.

The Once released their fourth album, Time Enough, in 2018 and have spent the past four years touring Canada, the United Kingdom, Europe, and Australia. On this album the band stays true to the strength of their three-part folk harmony sound, while extending its borders into new territory that stays fresh but sounds unfamiliar.

The Gros Morne Theatre Festival is thrilled to partner with Cow Head Heritage Committee to bring you a performance by the wonderful Jim Payne & Fergus O’Byrne on Monday, Aug. 1 at 8 pm at the Fortis Theatre, Nurse Myra Bennett Centre for the Performing Arts

This one-night only performance is Sponsored by the Government of Newfoundland and Labrador  Come Home Year2022 and Cow Head Heritage Committee.

Fortunate Ones is a contemporary folk duo from Newfoundland. Celebrated for their harmony-entwined songs of hope, resilience, and the human condition and their joyfully disarming live shows, they have toured relentlessly, bringing their open-hearted performances to thousands of people across North America and beyond.

Catherine and Andrew have been busy since the release of their debut album The Bliss in 2015 – thousands of miles, hundreds of shows, award winning albums and scores of fans have all been hallmarks of the success the duo has experienced since their humble beginnings in St. John’s. The Bliss was nominated for a JUNO Award and landed two #1 singles on CBC Radio 2’s Top 20.

On their sophomore album Hold Fast, the title track hit #1 on the CBC Music Top 20 Chart.

The album also took home three Music NL Awards in 2018, was nominated for four East Coast Music Awards, and the 2019 Canadian Folk Music Award for Vocal Group of the Year. To date, songs from Hold Fast have over 16 million streams on Spotify.

In the summer of 2020, Fortunate Ones took part in the collaborative Songs from Home EP with Newfoundland favourites Alan Doyle, The Once, Ennis Sisters and Rachel Cousins.  Written and recorded in isolation, the EP was released November 2020.